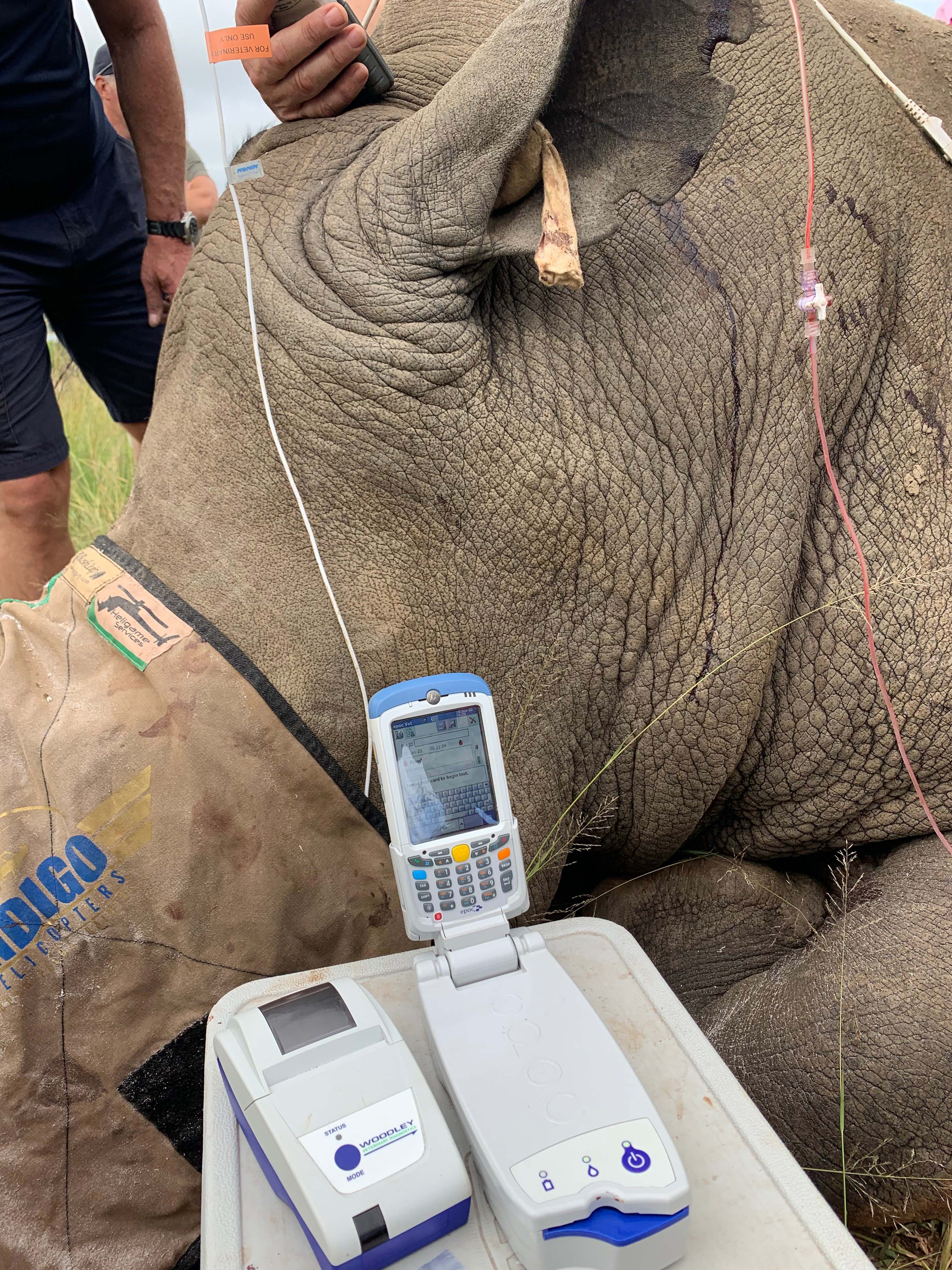 It’s fantastic to hear how Woodley’s distribution partner in South Africa, Kyron Labs were part of the Wildlife Vet Rhino Horn Trimming Workshop. The wildlife veterinarians come together to help protect the Rhinos where poaching remains an ever present threat. They learn as much as possible including safe anaesthetics, how to best care for injuries and caring for baby orphans of mothers who haven’t survived.

Horn trimmings are an important part of this - by trimming the horn as short as possible it reduces the likelihood of the Rhinos being targeted by poachers for their horns. It’s great to hear that the epoc Critical Care/Blood Gas Analyser was so useful as part of this.

“It was very good for the veterinarians to see what is actually happening inside the poor animals with the very strong immobilisation drugs they use in the darts on the Rhinos, it helped them understand and the importance of intervening as quickly as possible to stabilize the rhino’s when they get to them. They took samples as soon as they could get to the rhino, then again after injecting partial opiate agonist/antagonist drugs, and you can clearly see how the Rhino’s blood gas parameters improve after giving the partial opiate agonist/antagonist with the help of the epoc Analyser.”

To find out more please see the article below 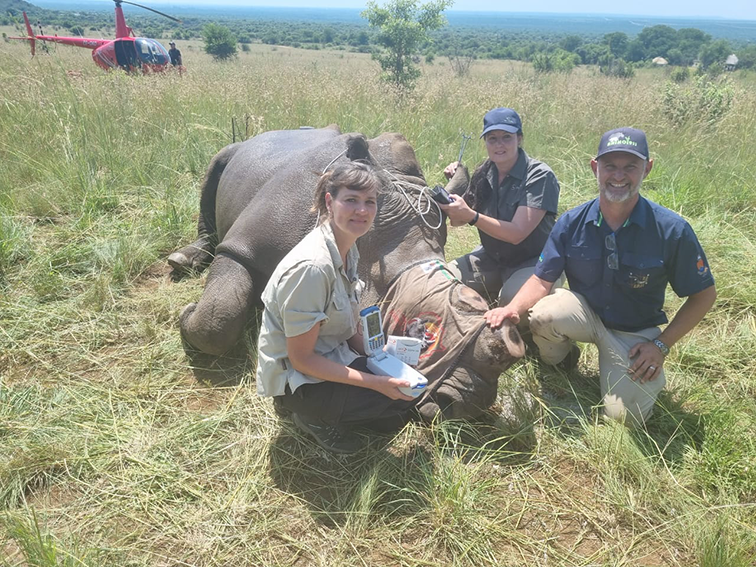 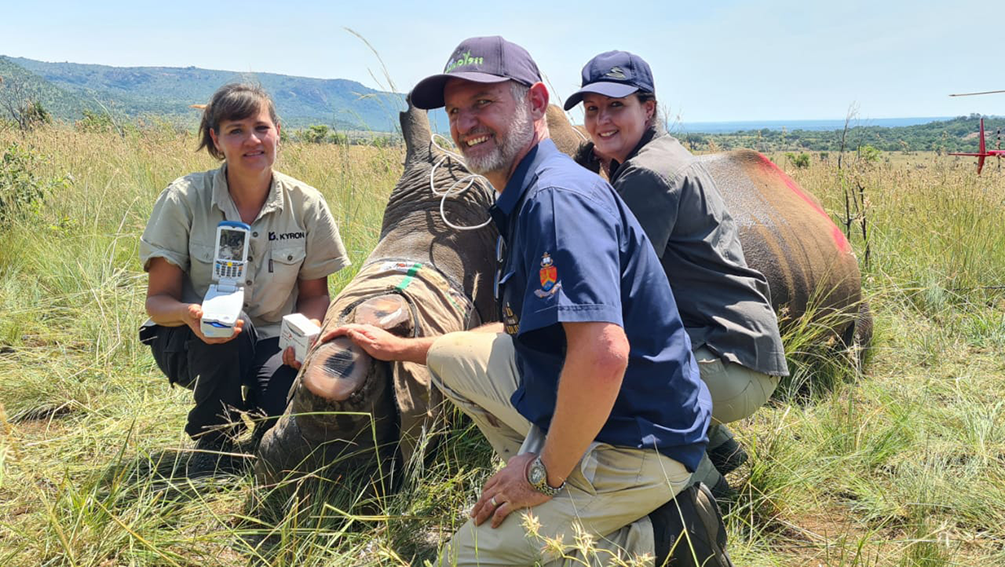 Due to increased dehorning being done to prevent rhino poaching, it has also become evident that a lot of the Rhinos experienced infections and abscesses in the sinus cavities due to horns being trimmed too short. As a result, this workshop was focussed on getting scientific answers and input from the wildlife veterinarians and Onderstepoort Faculty Lecturers to find the best practise and procedure for safe and scientifically proven horn trimming protocol for veterinarians.

Each day started bright and early before the temperature started to rise, as this can easily lead to Rhino’s overheating. Once darted and properly immobilized by Dr Gerhardus Scheepers and Dr Douw Grobler, each white rhino or black rhino was set up with the Nonin Palmsat pulse oximeter, using the Transflectance probe on the third eyelid. Prof Leith Meyer also set-up and demonstrated the Intra Torr intra-arterial blood pressure monitor, whilst arterial blood samples ran blood gas analysis on the EPOC Blood Gas Analyser. Woodley Equipment Company was generous to sponsor 50 epoc veterinary test cards for the workshop. Dr Ample Viljoen took x-ray’s before and after the trimming of the horn, to match the areas on the outside of the horn to the inside of the horn to have a better idea on horn mechanics, where they cut, and what are they cutting into. This is to understand if the piece of horn left on the Rhino is sensitive or painful should they fight or press against an object.

Dr Robert Campbell used a Digital FLIR thermal imaging camera to detect the horn surface temperature while it’s been cut to try and get the answer on “are we causing harm by the heat generated while cutting the horn” using chain saws, oscillating saws and grinders. With the use of the FLIR camera it revealed that the maximum surface temperature on the tools averaged around 110°C and on the horn, it averaged around 79°C. The Big Fella Thermometer and a modified digital thermometer were used simultaneously to check the rectal thermometer of the Rhino, and they were on par – giving the team an indication to start to cool down the Rhino’s to avoid heat stress and complications. It was also interesting to see how much better the rhino’s reacted to the procedure when a nerve block was done.

Every evening with the arrival of a new group of wildlife veterinarians, Prof Gerhard Steenkamp gave an anatomy talk on the horn and horn growth plates – to understand the anatomy to try and find the best length that they can cut the horn as short as possible without causing harm to the rhino. Interesting facts from Prof Gerhard’s presentation included that Rhino horn composition is the same as your nails. The growth bed or germinal layer consists of papillae that is about 13mm long, and there are about 8 papillae per square centimetre – so if you calculate the surface it amounts to about 450,000 papillae and if you flatten it out it will be about 5 kilometres surface area as calculated by Dr Ample Viljoen – no wonder a rhino can pick up another 1.2 tonne rhino when they fight without breaking their horns! Studies have been done to ensure these trimmings don’t change the dominance and social structure within a population, and it makes absolutely no difference.

Prof Leith Meyer analysed the Blood Gas results and confirmed (an already know fact) that the immobilisation drugs used in rhino cause extreme hypoxia and extremely high blood pressure. He suggested to the delegates that they should first give Butorphanol when they get to the rhinos, just to reverse the extreme side effects of the drugs that were used in the dart, to have a safer immobilization for the intended procedure. There will be more research, studies and workshops on this issue in the near future to get answers on a lot of questions, but for now it’s been decided that they will err on the safe side – exact measurements will be determined, and a complete protocol will be established.